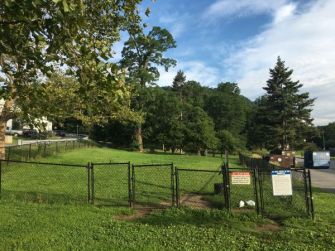 via Patch – Thanks to the wife of a West Point colonel, families with dogs at the United State Military Academy will have a new amenity in their future.

Leigh Hansbarger, whose husband Col. Tom Hansbarger is director of cadet activities at West Point, suffered the loss of her dog Stella, a Jack Russell, while on vacation.

Coming back to West Point, after her loss, she would pass the area that was used as a place to exercise dogs of academy families and would think of her Stella.

Leigh Hansbarger said that the area wasn’t really an official dog park; it was just a place that the milltary community used to play with and exercise their dogs.
She said that Stella loved the dog park.